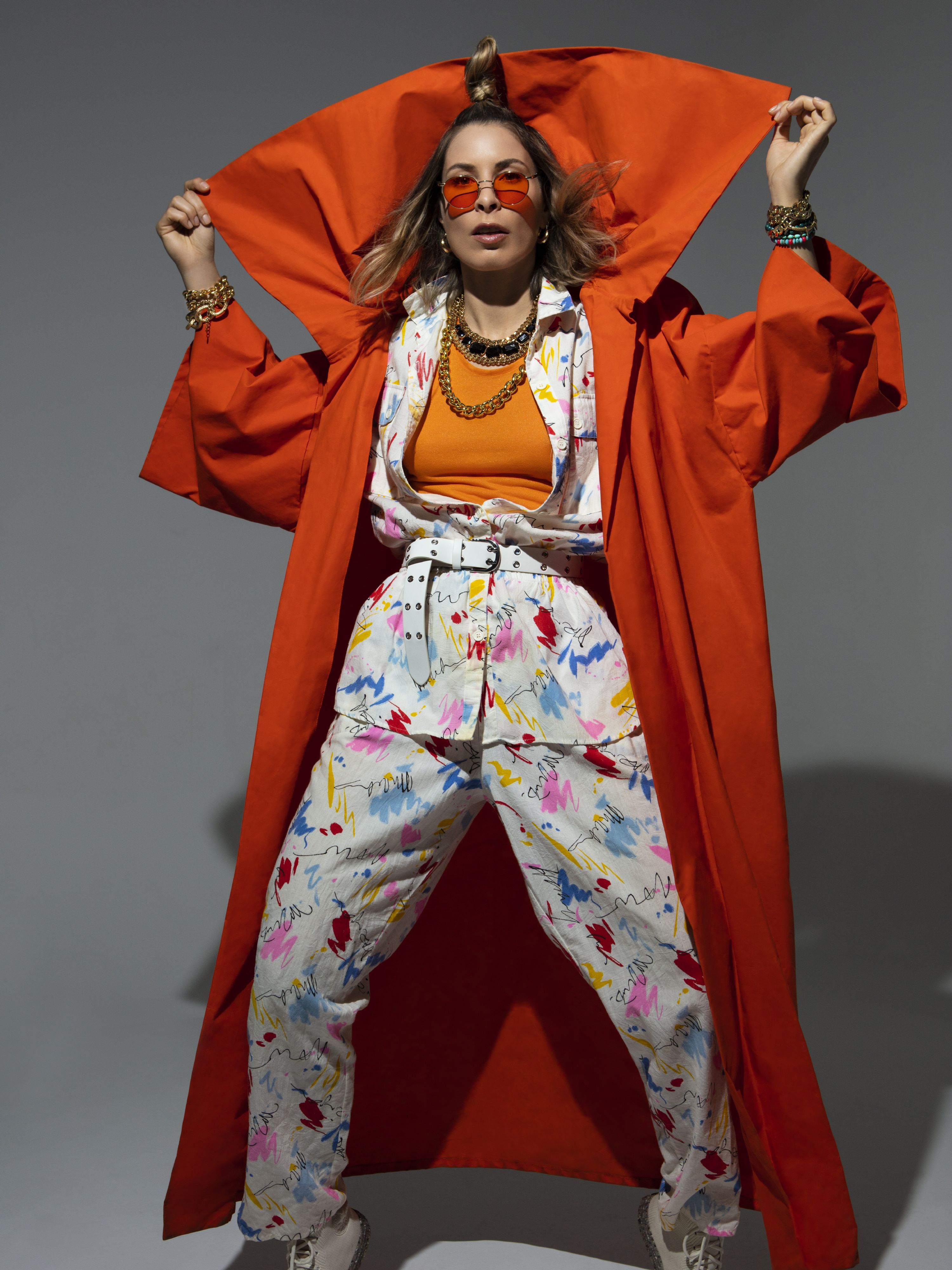 Walking the walk into the next phase…

In the latter part of 2018, BLOND:ISH moved into a new phase in their history, with Vivie-ann Bakos taking sole charge of the DJ double-act she originally shared with Anstascia D'Elene Corniere.

This pivotal change demanded an all-embracing refresh of the BLOND:ISH biography. A modernisation of the BLOND:ISH life story so far. And that's what you're reading now. If you’re reading this at all, that is. "Because sometimes I wonder if people even read DJ bios anymore," Vivie-ann laughs when we ask her what she hopes to convey here. "Ultimately I just want people to be inspired," she continues. "But I also want people to read it to the end!"

Vivie-ann explains that engaging you, the reader of this bio, all the way to the end is our job. The only other instruction we're given is not to mention the word 'spirituality' too much. Because even though Vivie-ann is electronic music's most celebrated mystic thinker and ecological revolutionary, she doesn’t want to sound cheesy or, worse still, like she's preaching.

Which is fair enough. After all, there's no need to force a change that is already upon us. Because although there was a time when spirituality was considered a delirium of the fringe, countercultural themes like yoga, tantra, cosmic astrology, mindfulness and eco-awareness are fast becoming part and parcel of our everyday existence, not to mention our daily vocabulary, promoting a new wave of positivity and self responsibility that continues to change our lives for the better. People everywhere are starting to get it. And it would appear that BLOND:ISH is tasked with smoothing our transition into this new way of thinking.

One of the core components of this expanding global culture is the so-called nomadic dance scene, which was forged at Burning Man in the searing heat of Nevada's Black Rock Desert. Psychedelic house, trippy techno - whatever you want to call this burgeoning dancefloor sound defined by ineffable moods and real instrumentation - when it comes to driving the scene forward, both musically and conceptually, BLOND:ISH leads the way.


Vivie-ann isn’t crazy about using labels to define her sound and that's about as close as she's prepared to get when it comes to the genrefication of her music. "Words are limiting," she explains. "Without getting too philosophical, the music I play is just part of the overall party experience."

If you've been lucky enough to catch BLOND:ISH performing in Ibiza, you'll know exactly what Vivie-ann is talking about. Whether she's fronting for international dance brand Circoloco, artisan headliners such as Black Coffee or the more esoterically aligned WooMooN, there's no debating the fact that a BLOND:ISH DJ set can open up sacred portals to differing realities, affording access to those largely unexplored realms of awareness existent beyond the audible perception of the human ear.

When it comes to invigorating the conscious awareness of her fans, Vivie-ann's own ABRA party - an offshoot of her ABRACADABRA record label - goes even further. There you'll discover cinnamon dust hanging like aphrodisia on the ether, while layered binaural frequencies broadcast over the loudspeaker system, intensifying the hypnotic vibe on the dancefloor.

It's the synthesis of these many sensory nuances woven into the fabric of Vivie-ann's DJ performances that makes a BLOND:ISH show truly unique. Vivie-ann isn't only dropping beautiful records, she's also sharing her ethos on how the world might look and sound when we decide to inject a little more love, thought and passion into everything we do. You'll find the same theme underpinning 'Welcome To The Present', the contemplative long player released on Kompact back in 2015. Marked by poignant moods, angelic susurrations and most importantly an axiomatic self-awareness of its own eternal existence in the now, 'Welcome To The Present' exemplifies the BLOND:ISH doctrine better than any combination of words ever could.

In addition to making a positive difference to the world via the medium of music, Vivie-ann also believes that today's top-tier DJs can tap into their celebrity with a view to using their voice to promote positive change within the industry. "DJs have such a close connection to their community," she says, "and our fans really listen to us. I want to take the influence of music to the next level. And I'm hoping we can all evolve together."

BLOND:ISH recently launched a campaign called Bye Bye Plastic aimed at persuading dance music venues across the world to quit using single-use plastics. "In our first campaign all the DJs involved are going to change their riders," Vivie-ann explains. "It will be a co-ordinated effort across the scene with somewhere between 50 and 100 DJs involved. We have plans to connect with more artists after that."

And team BLOND:ISH aren't going to stop there. As soon as the use of plastic cups, straws and water bottles has been reduced, "the next bit of homework that we need to focus on as an industry is making sure we're not ruining the paradisal ecosystems we're visiting. I'm so connected to the trees, to the jungle and to nature." Vivie-ann continues. "I love outdoors venues period; DJing with my shoes off with the crowd not too far away. As DJs, promoters and ravers we're constantly searching for these new paradise locations. But the most important thing as consumers is that when we do visit these new places we're not creating lots of waste. I've spent so much time in Playa del Carmen these last few years and I've seen how it's changed. We're all going there with good intentions, but because we don’t have the right tools we're in danger of ruining it. As a scene we need to figure out how we can party without harming those sensitive ecosystems."

Clearly there's a lot of work to be done. And if the human race truly has reached a musical, cultural, social, political and ecological juncture in its history then perhaps we're all going to have to make some changes if we want the party to romp along at the same wild pace.

Vivie-ann Bakos has a vision of what those changes might be. But she doesn't profess to having all the answers. And the last thing she wants to do is sound like a preacher. Yet at the same time she's not going to back down. Why? Because she's on a mission. A cosmic, fun-filled musical journey that involves the best nightclubs in Ibiza, her beloved Tulum, Scorpios Mykonos, as well as scene defining festivals such as Burning Man and Coachella. It's a mission that involves connecting with her fans. Sharing an inspirational vision of unadulterated positivity on the dancefloor and in the studio. But ultimately BLOND:ISH promotes taking the right path. Doing the right thing. Discovering your own truth. Realising that dance music truly can be a power for good. And not just talking the talk, but walking the walk.