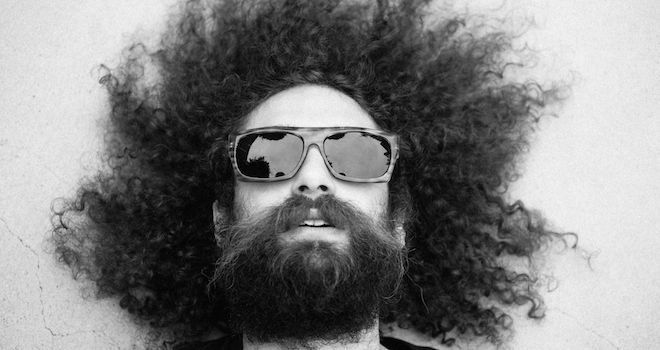 LA’s William Bensussen, aka The Gaslamp Killer, is many things at once. The San Diego native is a bonafide one-off; an artist and human being that can never be repeated. With an unparalleled energy, the DJ, producer, promoter and curator brings a different level of performance and showmanship to electronic music.

“I always felt drawn to party time ever since I was little. Any kind of opportunity; a wedding, bar mitzvah, holiday. Whatever kind of event that was going on in my little community in San Diego, if there was music, I was dancing. It’s just the way it was. I’ve always been into the energy and the happiness that it brings.”

Being a true music lover, and a complete obsessive, as a DJ/selector Bensussen has opened minds around the world to music that wouldn’t otherwise get heard. In his own words: “As artists, it’s our job to entertain as well as educate.” Alongside co-founder Daddy Kev, GLK has put Southern California on the music map for years to come, with their beat mecca Low End Theory and the vibrant creative

community they’ve built around it. The weekly Wednesday club night has brought together different scenes and generations, breaking new artists while also getting the likes of Thom Yorke and Erykah Badu to play DJ sets to the fevered Low End crowd, who often wait hours to get in.

Over the last ten years, Gaslamp Killer’s iconoclastic attitude has led him beyond LA to far-reaching corners of the globe, one stage at a time: from Pitch in Amsterdam, to Sonar in Barcelona, to Austin Psych Fest, to Roskilde in Denmark, to Coachella. Holding a collection of well over 13,000 vinyl records, GLK’s untamed, unpredictable sets take traditional genres of rock into the outer reaches of hip-hop and the deep into the cosmic pressure of the heaviest electronic beats, with plenty of obscurity and bizarreness in-between.

The now rare, GLK collectables “I Spit On Your Grave” (Obey) and “All Killer” (Finders Keepers) inspired a new generation of DJs to appreciate the art of a mixtape. Dusted Magazine described his follow-up mix, “Hell And The Lake Of Fire Are Waiting For You” (self-released), with words that describe GLK as a DJ in general: “Trying to figure out what’s going on is half the draw.”

“The music that I grew up with influences me today enormously still. I love classic rock, I still love Dub and I still love Rap. Real rap. Gansta rap. I love bands, live bands, it’s the music I grew up with. I don’t think there are that many bands that can compare to Jimi Hendrix, Led Zeppelin, Pink Floyd, The Doors. They’re not popular for no reason. I play The Beatles in my sets all the time still. Their music is a huge influence on me. I still play Dr Dre in my set all the time. His beats and the rhymes, the energy, they just affect me so much. They are a part of me. As well as Hip Hop, as well as Rock, and Blues, and Soul, and Jazz, and Reggae, and Dub. That kind of music I think lends to everything that we are all into today. All of us are fueled by that. The formulas that they laid and the foundations that they laid are used by musicians forever and will continue to be used forever.” interview with Serato: http://serato.com/icon/the-gaslamp-killer)

As a producer, The Gaslamp Killer has worked with artists such as Gonjasufi, Prefuse 73 and Flying Lotus. His own experimental solo material pushes the borders of genre as much as his performances, particularly with his heavy-weighted EP ‘My Troubled Mind’ (Brainfeeder) and the monster ‘Death Gate‘ EP (Brainfeeder), which featured Gonjasufi, Computer Jay and Mophono.